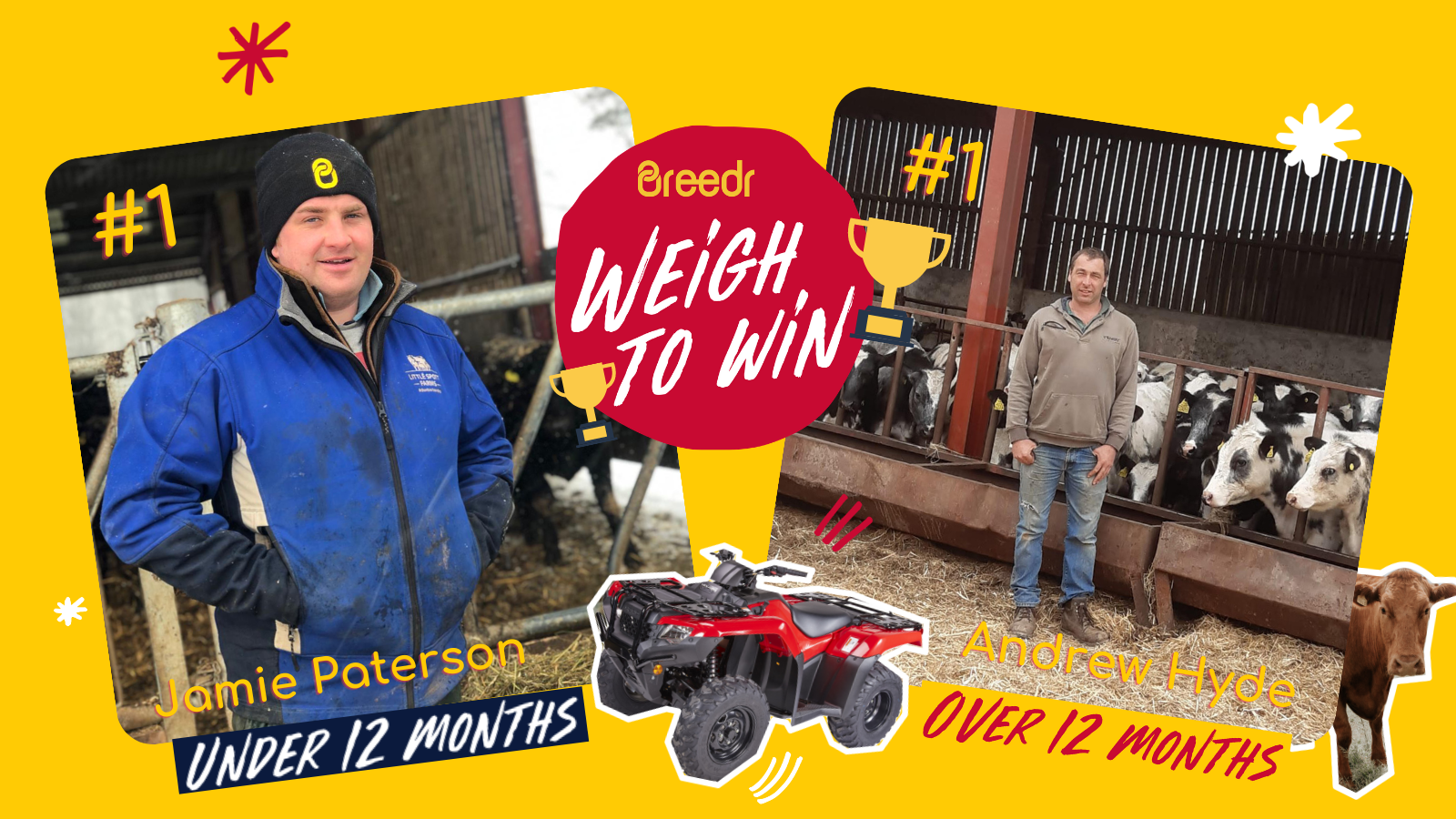 It’s the news you’ve all been revved-up for!

Find out more about our winners:

The Breedr Weigh to Win competition, which ran from 1 November 2020 to 31 March 2021, saw 240 farmers recording their cattle weights on a regular basis, so they could tailor feed rations and management accordingly.

Topping the table in the over 12-months category was Andrew Hyde, who keeps 450 head of beef cattle at Woofferton Grange, Ludlow, Shropshire. He buys British Blue x dairy calves from a dedicated rearer at 12 weeks old and finishes them on contract for a large supermarket. “We get them in at about 130kg and finish them at around 600kg liveweight, at 20-22 months old,” explains Mr Hyde.

His winning group of 46 cattle averaged an impressive daily liveweight gain (DLWG) of 1.88kg over the five months, which he attributes to grazing them last summer, growing their frames so they were ready to respond to a fast-growing diet over the winter. Most finished at the target R3 or 0+3 grades, thereby commanding a valuable price premium.

The family farm spans 1100 acres and comprises a mix of arable, beef and sheep – with sugar beet supplied to a local anaerobic digestion plant as well as for cattle feed. “When the youngstock arrive on farm, for the first month we feed a blend that’s similar to the rearer feed they were on,” explains Mr Hyde. They are then transitioned onto a total mixed ration of grass silage and rolled home-grown barley with sugar beet.

Mr Hyde groups the cattle according to size and weighs them monthly, shifting them into other groups if required so they can be fed to weight. Younger or smaller ones are grazed over the summer, while finishers are housed on open-fronted straw yards.

“We only started weighing in November, and with the Breedr app it’s really easy to sort out the groups and record any medical records,” he says. “We used to select finished stock by eye, so now sometimes we’re shocked by the actual weights – I’m definitely surprised by the way they’ve grown this winter. But it helps us to see what’s coming up to slaughter.”

Recent changes to the farm management have included increasing from two cuts of silage to three per year, in a bid to improve its feeding quality. And Mr Hyde is now buying smaller groups of youngstock every two months rather all in the spring. “The supermarket wants more consistency, and it’s quite hard financially when you have all fatstock because they’re eating so much. If you level it out throughout the year it’s better for cashflow.”

The results speak for themselves – but Mr Hyde never imagined that he would win the Breedr competition. “I never looked at the leaderboard – I had no idea until the call to say I’d won a quad bike – I still can’t really believe it,” he says. “We’re not doing anything special, we’re just a normal family farm. But we do need a new quad bike as my father’s is pretty knackered – he’s over the moon.”

Winning the under 12-month category was Jamie Paterson, farm manager at Little Spott Farms, Dunbar, Scotland. He manages 130 Limousin x Charolais suckler cows across 400 acres of grassland, rearing the calves to sell as stores at seven to eight months old and 400kg liveweight. “We try to keep things simple – we calve inside in March and April before turning them out to grass over the summer,” he explains.

But this year he tried a couple of different things – the first was to calve heifers a bit younger, at 24 months, and the second was to introduce a new calf feed. “We’re pleased with the results. We run our own bulls and are buying in bulling heifers to grow the herd, but we are looking at producing our own replacements in future and the heifers did well.”

Mr Paterson creep feeds the calves at grass from August onwards – and this year replaced his barley and mineral mix with a specialist high-quality calf blend. “It pushes them on a bit quicker; if we can sell calves a month or more earlier, then at an extra cost of £30/t of feed it’s a worthwhile return on investment.” As a result, his winning batch of 35 animals averaged a DLWG of 1.44kg.

He takes two cuts of silage and, once housed, feeds the cattle twice daily, with hard feed just once a day. Larger calves are weaned and sold at housing, while others are kept on for longer. Mr Paterson weighs the youngstock once a month, moving them into different groups according to their size and weight. “Using Breedr to record the weights with EID tags is really easy. Plus it predicts their weights – so if you haven’t weighed for a week or so you can still see which ones to pick and sell; it’s pretty much bang on every time.”

Mr Paterson sells both privately and at Stirling market – although he also plans to sell through the Breedr app in future. “Providing buyers with actual DLWG is really helpful – it gives them confidence. And this time next year I can look at my bull and cow genetics in the app, against how the calves perform, and tailor my breeding choices.”

Ready to get weighing? Farmers in Scotland will have to log all cattle movements with ScotEID from 4 October 2021,...